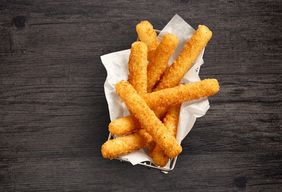 Rietberg/Jerome, February 24th, 2020. Rite Stuff Foods is going to be represented at the AFFI-CON in Las Vegas from the February 29th. The business-to-business sessions, which are going to take place at the Trade Fair, will concentrate on in-depth and comprehensive discussions with business partners as the core element of the four-day conference. One special event will be the tribute to be paid to Rite Stuff Foods founder and long-time CEO Tom J. Madden. Tom is one of three leading personalities who will be honored at the event, in his case for his life's work in the industry, which will be followed by him being inducted into the Frozen Food Hall of Fame. Rite Stuff Foods has been a member of the Frostkrone Food Group since 2019.

“We would like to take this opportunity to congratulate Tom Madden on receiving this award. He can look back with pride on an amazing life's work. It has been an honor for me to know him and to be able to work with him,” explains Frédéric Dervieux, CEO of Frostkrone Food Group.

Tom J. Madden's career initially began back in 1961, when he started working at General Foods. In 1989, he founded Rite Stuff Foods and subsequently developed the company into a successful producer for potato specialities. Last year he sold the company to the Frostkrone Food Group and handed over his management role to John MacArthur.

With currently more than 230 members of staff at the company, Rite Stuff Foods is regarded as one of the leading producers of potato products in the USA. The company processes the original Idaho potato and provides their customers with an ever-increasing range of products, including twice-baked potatoes, potato skins, potato boats, as well as fried and stuffed peelings In recent times, Rite Stuff Foods  also started to produce trendy finger foods and snacks such as, for example, the very popular Mozzarella Sticks and the fiery Chili Cheese Nuggets brands.

The American Frozen Food Institute (AFFI) is the trade association which is responsible for representing America's frozen food and beverage manufacturers. The annual conference concentrates on providing a varied mix of interesting lectures and training sessions regarding the important subjects which concern the industry.
Moreover, B2B sessions also provide producers with the opportunity to network professionally with representatives from retail trade and wholesale trade as well as those from the food service industry.

John MacArthur explains: “The days at the conference are ideal for an intensive exchange with industry and trade. We meet up with interesting business partners every year here, create new contacts and can consolidate our existing ones.”

Rite Stuff Foods currently has more than 200 members of staff at the company which makes it one of the leading producers of potato products in the USA. The company exclusively processes Idaho®potatoes.

Founded back in 1989 by Thomas J. Madden, Rite Stuff Foods has continuously developed its business and remained successful in recent years. The producer has been managed by John MacArthur, Managing Director of Frostkrone Food Group USA since April 2019.

Rite Stuff Food Inc. provides a steadily increasing range of delicious potato snacks and side dishes which include, among others, twice baked potatoes, potato skins, chopped and breaded wedges, potato boats and potato rolls. In the future, they also intend to produce Mozzarella Sticks, Chili Cheese Nuggets and other snacks which will also roll off the production line at the company location in Jerome. Products, which were only previously imported from Europe, will then be delivered from the domestic production facility to supermarkets and into the food service chain.

The company is audited according to USDA and SQF certified.

The Frostkrone Food Group, operating from its head office in Rietberg, North Rhine-Westphalia, specializes in producing, marketing and distributing frozen finger food products as well as snack products. Since it was founded in 1997, the company has been able to establish itself as an innovative pacemaker in the convenience frozen food sector.

As well as the frostkrone Tiefkühlkost GmbH and Bornholter Käsevertriebs- und Produktionsgesellschaft GmbH, Piz'wich Europe SAS and Varenne Gastronomie SAS have been integrated into the Frostkrone Food Group since 2018. Rite Stuff Foods Inc., based in the USA, has complemented the company group since 2019.
Since February this year, the Scottish company Innovate Foods Ltd. has also been integrated into the group of companies.

The Frostkrone Food Group is today characterized by its large variety of finger food and snacks and markets its products for the foodstuff retail trade as well as to the food service sector. The diverse product range is currently available worldwide in countries which include, among others, Scandinavia, the Netherlands, France, Spain, Portugal, Great Britain, Switzerland, Eastern Europe, Asia and the USA.