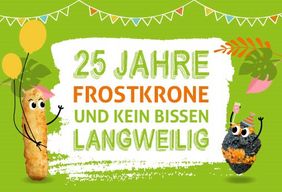 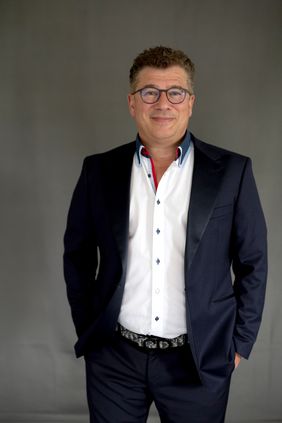 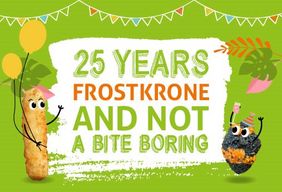 Rietberg, 24 August 2022. The successful company history of Frostkrone began in Germany in 1997. Since its founding, the company has established itself as an innovative trendsetter in the deep-frozen, convenience food segment. Today the Company Group, boasting eight locations and employing a staff of over 1,000 people, is one of the major producers of finger food and snacks worldwide.

“25 years of Frostkrone in Germany. That is not just a question of company history but, first and foremost, it tells a success story. Production rates, turnover and the number of employees have all steadily increased. We have been recognised for years as an innovation driver and leader in the world of finger food and snacks and have always been valued for our variety and for our quality,” proudly explains Frédéric Dervieux, CEO of the Frostkrone Food Group.

In the beginning in 1997, it was fish and meat products that took centre stage before the first finger food and snacks designed for the deep freezer began to come off the production lines. The idea for such a sea change originally came from the USA. Frostkrone then proceeded to use its products to introduce such a food category in Germany. The first kinds of finger food featured Mozzarella Sticks, Chilli Cheese Nuggets and Cream Cheese Jalapeño snacks. As a result of the sale to a private equity company by the then proprietors, in 2013 Frédéric Dervieux took charge of the business and focused entirely on the deliciously tasty little snacks. From that time onwards, this foodstuff category has been constantly extended and advantageously positioned in the retail and food service segment.

The year of 2017 saw the Emeram Capital Partners GmbH in Munich/Germany become the new investor and controlling shareholder. Together with Frédéric Dervieux, the way was now free to implement business plans designed to bring about international expansion. In 2018 all the participating companies came together to form the Frostkrone Food Group. As the selection of finger food and snacks was being constantly extended, the Group’s position within the markets continued to strengthen. And since 2017 Frostkrone has been the partner of the successful Bundesliga team BVB from Dortmund.

The year of 2020 brought with it massive challenges for everyone. “Finger Food & Snacks” turned into a hugely popular category on supermarket shelves and production was firing on all cylinders. In that same year Emiel Lommen took over as Managing Director of Frostkrone Germany. He is currently responsible for three plants employing approximately 450 members of staff: “I myself have been part of the Frostkrone family since 2017. In the world of foodstuffs, there is hardly anything as exciting as the finger food and snack segment. And it is particularly so at Frostkrone that the activities and tasks are incredibly diverse and the targets set amazingly ambitious. And it is an honour and a delight for me that I am able to play a leading role in all this.”

Whether we’re talking bestsellers like the Crunchy Homies, the practical Pizza Pockets, exquisite variations on fine, delicate finger food or then again the totally vegan food range known as “Really”: both the food trade and also the food service business throughout Europe, the USA and in Asia know and hold in high esteem the incredibly varied product range of the Company Group. In addition to the frostkrone Tiefkühlkost GmbH in 1997 and the Bornholter Käsevertriebs- und Produktionsgesellschaft GmbH, since 2018 Piz’wich Europe SAS and Varenne Gastronomie SAS have also been part of the Frostkrone Food Group. In 2019 the US-American business Rite Stuff Foods Inc. swelled the ranks when they joined the Group. Since February 2020 Innovate Foods Ltd and since April 2021 Abergavenny Fine Food Ltd, both from Great Britain, have also belonged to the Company Group. The Frostkrone Food Group supplies a total of 45 countries throughout the world and produces 20,000 tons of finger food and snacks every year to meet the demand.

Innovation as the Success Factor

The Frostkrone team is never short of creative ideas. “We’re always on the lookout for what is changing on the market. What are the new trends? What could we imagine as the new finger food and snack constellations? In this way we develop new and exciting ideas that in every sense really go down well with consumers.” continues Frédéric Dervieux. Since 2019 the Frostkrone Food Group has come up with a good 320 innovations. To this end, it is so important to explore new avenues. One such example, showcased for the first time last year, is the snack-to-go range “Ready To Eat” designed for the refrigerated counter. As part of the launch, the new production facility in Paderborn/Germany was equipped with cutting-edge technology, which allows the products not only to be eaten cold immediately but it also gives them a long use-by date of more than 25 days. And incidentally, the “Ready To Eat” food range received several awards and accolades as soon as it appeared..

“It is precisely our latest development that clearly demonstrates what a tremendous amount of work lies ahead of us. Just a few months ago we were able to put the technically most modern plant of the Frostkrone Food Group into operation in Paderborn. It means that we have yet again made a quantum leap. This new
cutting-edge site enables us to further ramp up our production and storage capacities many times over,” explains Emiel Lommen optimistically.

Heading into the Future Together

Despite all the challenges on the horizon – the Frostkrone Food Group is looking into the future with a positive mindset. Although the Company Group has been growing at a steady pace, it is nevertheless very dynamic and proud of the fact that it reacts swiftly and reliably when faced with changes. Fréderic Dervieux describes the situation in the following way: “We are enormously agile and our response speed is very fast. Our world is digital and networked. Today products have a much shorter “lifetime”. Trends change fast. The key word here is “flexibility”, a quality which enables you to place yourself in a positive position on the markets.” At the same time international orientation and close collaboration between the various locations give the entire Company Group a competitive edge. And in harmony with this global aspect, the locations enjoy good local networks and are well established in the domestic markets.

The Frostkrone Food Group - with its headquarters located in the town of Rietberg, in the federal German state of North Rhine-Westphalia - stands out in sharp relief because of its incredibly wide variety of finger food and snacks. The Group markets its products in the food retail trade and also in the food service industry. The many-faceted range of products is available worldwide in a great deal of countries including those in Scandinavia, the Netherlands, France, Spain, Portugal, Great Britain, Switzerland, in the eastern European countries, Asia and in the USA.

The Frostkrone Food Group boasts several cutting-edge production facilities in Germany, France, Great Britain and in the USA. Since its founding in 1997, the company has established itself as an innovative trendsetter in the deep-frozen, convenience food segment.